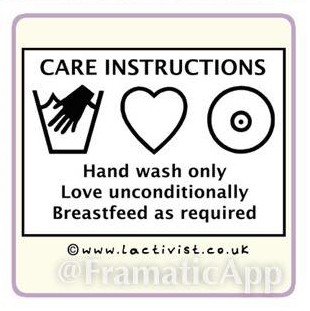 Before I was pregnant, before I even fathomed the idea of looking after a human spawn, I used to think that parenting was a walk in the park. I used to see toddlers and children throwing tantrums in public and think ‘*ugh* Why can’t parents just control their kid?’ Now, I look at the parent sympathetically and depending on the setting or situation I will see if they need help with anything.

I used to think Super Nanny was the bees knees. Now I am more educated and informed, I realise that she is a cock. Not only does she have no kids of her own yet thinks she knows all about parenting, but she spouts dangerous and harmful ‘advice’ that could be harmful for children and parents. Some of her parenting methods are easy for her to spout and believe in as she has no kids and therefore has no maternal instincts. That’s probably why as soon as I found out I was pregnant I was pro attachment parenting and couldn’t think of anything worse than Jo Frost or Gina Fraud when I previously loved watching the shows.

When I was pregnant, I was preparing myself for no sleep. Freddie still wakes up in the night and he’s 9 months old however, excusing the first few weeks and the odd growth spurt/sleep regression, I’ve still managed to get around 8-9 hours a sleep a night on average. Thanks to good old co sleeping. People always ask why he isn’t in his own room yet. Erm, basically because I like sleep, he likes cuddles and I can’t be arsed to get up during the night to sit up and feed him for like an hour at a time whilst forcing myself to stay awake, it would be torturous and I’d probably be a shit parent due lack of sleep. Why would I willingly make myself have less sleep? After all, he’s not gonna be in our bed forever.

Before I was pregnant, I would be horrified at the thought of co sleeping. I was one of those annoying ‘you’re creating a rod for your own back blah blah blah’ *whiney voice* people. Then I came across attachment parenting and it taught me that the more love, attention and safety your child gets when they are young, the more independent, respectful and loving they will be when they are older. Tons of research has been done to prove this and now even the NHS recommend attachment parenting. That’s not to say that you’re not a loving or responsive parent if you don’t co sleep, some parents don’t need to co sleep as their baby sleeps fine in their crib. But most parents co sleep at some point with their children because the reality is, it’s normal and the only habit you’re setting is responding to your child’s cues.

15 thoughts on “Things I No Longer Believe About Parenting”